U.S. economic data were mixed in March, although leading indicators signaled low odds of a recession in the coming year [Figure 1]. The Conference Board’s Leading Economic Index, an aggregate of ten leading indicators, rose 0.2% in February for its first gain in five months and 3% year over year.

February’s jobs report, released March 8, was disappointing at first glance. Nonfarm payrolls rose in February, but the headline number missed consensus estimates by a wide margin. However, the weak jobs gain followed the biggest two-month increase in jobs created in 2.5 years. There were also signs of weather effects, as the number of non-agricultural employees unable to work was above the February average. The unemployment rate dropped to 3.8%, while the participation rate hovered around its highest point since 2013.

Inflation remained at manageable levels. Average hourly earnings grew 3.4% year over year in February, around the fastest pace of the cycle, but below the 4% growth that has historically threatened economic output. Growth in unit labor costs remains muted, so the current pace of wage growth is healthy but manageable for U.S. corporations. Pricing gauges also showed contained inflationary pressures. The core Consumer Price Index, which includes food and energy, increased 2.1% year over year, while the core Producer Price Index, which excludes food and energy prices, climbed 2.7% year over year.

Confidence gauges remain generally positive but have pulled back from their highs, reflecting U.S. consumers’ and business’s uncertainty amid global headwinds. The Conference Board’s Consumer Confidence Index climbed in February before sliding again in March. Consumer confidence and a healthy job market supported strong retail sales increases in January after December’s slide. Retail sales rose 0.2% in January, showing that consumer activity rebounded at the beginning of 2019.

Fed Doubles Down on Patience

The Fed doubled down on its patient stance at the conclusion of its March 19–20 meeting. Policymakers left rates unchanged and signaled a complete pause in policy, with a nod to a slowing pace of growth and global uncertainty. In the latest dot plot, Fed voting members projected unchanged to slightly lower interest rates this year, with one more rate hike in 2020 or later to lift the long-term rate to 2.75% [Figure 2]. Policymakers also lowered their gross domestic product growth projections to 2.1% for 2019 and 1.9% for 2020, while Fed Chair Jerome Powell acknowledged that global weakness could be a notable headwind to the U.S. economy. Still, Powell conveyed significant faith in U.S. economic fundamentals, noting in his press conference that “it’s a great time to be patient,” as the labor market remains strong, confidence has improved back to encouraging levels, and the outlook remains positive.

The European Central Bank (ECB) also adjusted its policy amid signs of slowing growth. On March 7, the ECB lowered its rate outlook for 2019, while announcing plans to start a new bank loan program in September to help stimulate economic growth. The Bank of Japan kept its benchmark rate negative at the conclusion of its March 14–15 meeting and continued asset purchases. 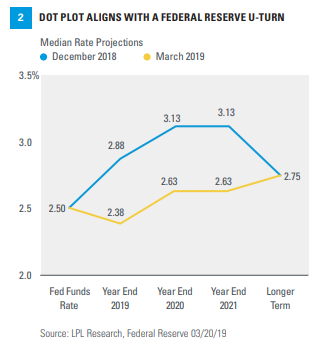 Investing involves risks including possible loss of principal. No investment strategy or risk management technique can guarantee return or eliminate risk in all market environments.

The opinions voiced in this material are for general information only and are not intended to provide specific advice or recommendations for any individual security.

To determine which investment(s) may be appropriate for you, consult your financial advisor prior to investing. The economic forecasts set forth in this material may not develop as predicted. All performance referenced is historical and is no guarantee of future results.

All information is believed to be from reliable sources; however, LPL Financial makes no representation as to its completeness or accuracy.

For a list of descriptions of the indexes referenced in this publication, please visit our website at lplresearch.com/definitions.

This research material has been prepared by LPL Financial LLC.

To the extent you are receiving investment advice from a separately registered independent investment advisor, please note that LPL Financial LLC is not an affiliate of and makes no representation with respect to such entity