U.S. economic data was mixed in August, reflecting the complicated macroeconomic environment in the midst of high trade uncertainty. 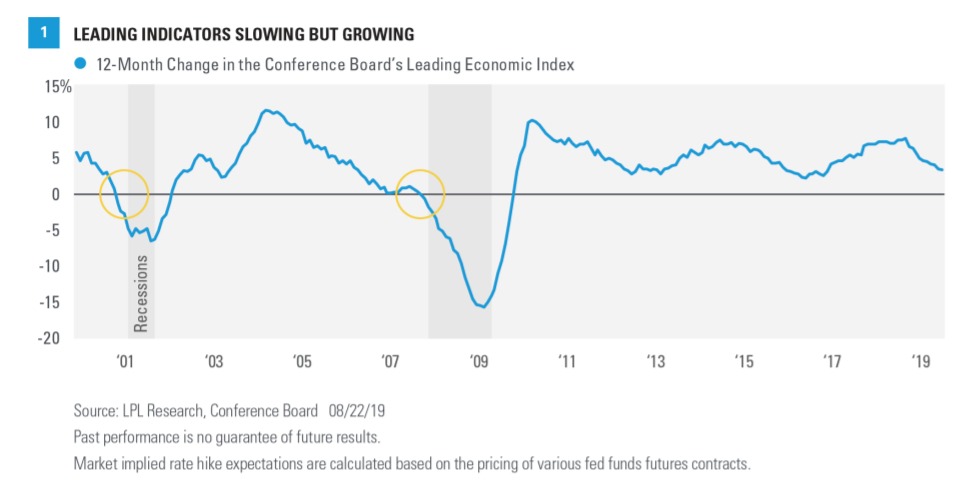 Gross domestic product (GDP) growth was revised to 2% for the second quarter, down from the 2.1% initially reported in July. Consumer spending added 3.1 percentage points to overall growth, while trade and inventories were a 1.6 percentage point drag. Business spending was still a slight drag on growth, according to the revised data.

The July jobs report, released in early August, showed nonfarm payrolls rose in line with consensus expectations. The 12- month average pace of payroll gains was slightly above the expansion average, evidence that companies are still hiring at a solid pace.

The pace of consumer inflation picked up in July. The core Consumer Price Index (CPI), which excludes food and energy prices, rose 2.2% year over year, its fastest pace of growth in six months [Figure 2].

Average hourly earnings rose 3.2% year over year in July. Wage growth has moderated in recent months, but it has remained at a level that should continue to support consumer spending without concerns of overheating.

U.S. manufacturing deteriorated further, caving to a global trend of weakness in the sector. The Institute for Supply Management’s (ISM) manufacturing Purchasing Managers Index (PMI), a gauge of U.S. manufacturing health, fell to 51.2, matching its lowest point since August 2016. Preliminary Markit PMI data for August showed the manufacturing sector fell into contractionary territory for the first time since 2009.

Data on the U.S. consumer was solid. The Conference Board’s Consumer Confidence Index posted its fifth highest reading of the economic cycle in August. Retail sales climbed for a fifth straight month in July.

Central banks around the world took a summer break in August. None of the major banks met in August, but the Fed, European Central Bank, and Bank of Japan all have meetings scheduled in September.

Investors did get a taste of Fed commentary during August, though. Minutes from the Fed’s July meeting, released August 21, showed the complexity of policymakers’ discussions leading up to the July rate cut. The minutes reinforced Fed Chair Jerome Powell’s description of the rate cut as a “mid-cycle adjustment.”

On August 23, Powell gave a closely watched speech at the annual gathering of central bankers in Jackson Hole, WY. Powell said the economy “continued to perform well overall,” but he highlighted increasing risks from a deteriorating global economy and uncertainty around trade, the same risks that induced the Fed to cut rates in July. While he didn’t lay out a clear policy path, Powell pledged that the Fed would “act as appropriate to sustain the expansion,” potentially laying the
groundwork for an additional rate cut when the Fed meets next.

Investing involves risks including possible loss of principal. No investment strategy or risk management technique can guarantee return or eliminate risk in all market environments.

The opinions voiced in this material are for general information only and are not intended to provide specific advice or recommendations for any individual security. To determine which investment(s) may be appropriate for you, consult your financial advisor prior to investing. The economic forecasts set forth in this material may not develop as predicted. All performance referenced is historical and is no guarantee of future results.

All information is believed to be from reliable sources; however LPL Financial makes no representation as to its completeness or accuracy.

For a list of descriptions of the indexes referenced in this publication, please visit our website at lplresearch.com/definitions.

This Research material was prepared by LPL Financial, LLC.